Great Divide Ranch, MT-- Preferring to protect themselves from opposition research, only 20% of the 1282 candidates for Congress were willing to provide voters or media with direct answers to the issue questions on Vote Smart’s National Political Courage Test.  However, Vote Smart has researched the public records of those not responding and published all candidates’ positions on twelve key issues in new, easy-to-use interactive applications at votesmart.org.

VoteEasy, an award-winning candidate matching tool, allows voters to enter their zip codes, answer the same issue questions, and discover which candidates are most like them on key issues.  VoteEasy is powered by data from the National Political Courage Test, which asks candidates one central question:  Are you willing to tell citizens where you stand on the issues you may face if elected?

The Test, has been endorsed by major media in every election since 1992, asks candidates to demonstrate their political courage by providing voters with that essential information, in spite of the fact that opponents might use their answers in political attacks.

The 2014 national response rate of only 20% marks a steady and dramatic decline, compared to 72% in the mid-1990s, and even 23% in 2012.  This is due in part to the documented advice of party leaders and campaign consultants to play it safe and not expose themselves to their opponents.  Republican and Democrat candidate response rates over the years have been virtually the same.  While their positions on the issues vary, their campaign tactics are in lockstep.

“The increase of money in campaigns has allowed candidates to develop sophisticated pollster-approved messaging and target voters with negative, issueless nonsense,” said Richard Kimball, Vote Smart President.  “Fear sells and the strategies for inflaming it have saturated both major parties and campaigns at every level, effectively stripping citizens of that most essential component in their struggle to self-govern:  their need to know what each candidate will do for them, or to them, if elected,” said Kimball.

About Vote Smart: An idea started by former Presidents Carter and Ford, along with 40 other national leaders from across the political spectrum, Vote Smart defends each citizen’s right to the facts about those who govern or those who wish to replace those who do. Vote Smart is funded entirely by individual contributions and foundation grants. 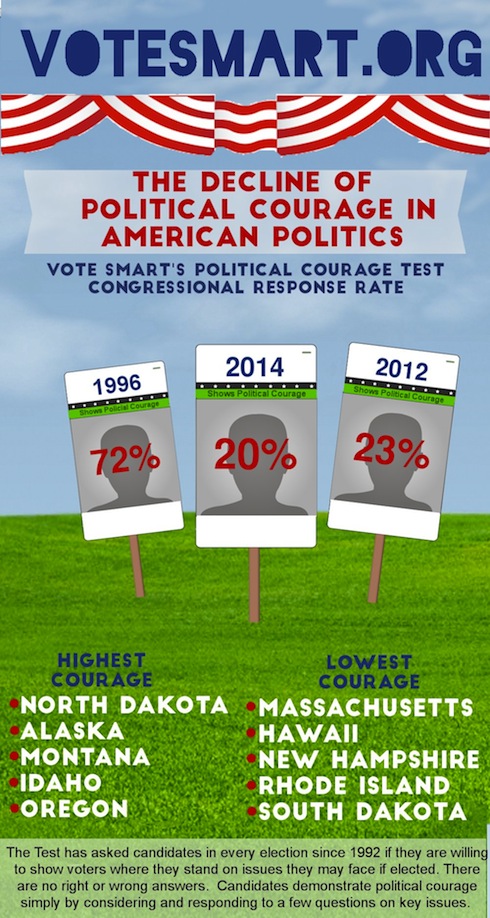