Find Your Presidential Soul Mate
Our award-winning interactive tool VoteEasy was recently launched for the 2012 election season, allowing voters to instantly see which presidential candidate best aligns with their views on issues such as the budget, health care, and national security.

Read what users are saying:

“This is awesome!! If you are not sure who you want to vote for or just want to make sure check it out, you can also learn a little along the way.”

“Demystifies the voting process and makes it accessible and informative.”

“Great resource for HS students preparing to vote for the first time or for anyone in need of basic politics refresh.”

“Pretty cool site breaking down some of the hot button issues for the upcoming election and assigns values to figure out which candidate shares your views most closely.”

As reported by KOTA-TV in Rapid City, SD, teacher Tamara Klein says VoteEasy “is now her number one tool in the classroom,” as she tries to introduce her ninth graders to the world of presidential politics.

We would love to hear your feedback on VoteEasy, so please send your comments and suggestions to comments@votesmart.org.


New Year, New Faces
Just in time for what promises to be a busy year for us, we’d like to introduce several new additions to our staff, including Elizabeth Gouner, a recent graduate of LSU, who has joined our Political Courage Test department where she will assist with the coordination of candidates’ issue position research. Tennessee native Eric Henderson has joined our Development and Communications department, coordinating many of our new and current fundraising campaigns, in addition to fulfilling material requests.

Natasha Roberts has joined our staff at the University of Texas, Austin, where she had previously worked as a Legislative Research Intern, and is now responsible for tracking major legislation in multiple states.

Also joining our staff this month, another previous intern, Ben Raker, who will be working in our Development and Membership department as a Development and Communications Associate.

We would also like to welcome the newest member of our board, Dr. Kate Kenski, award-winning author, and professor of political communication, public opinion, and research methods at the University of Arizona.

Lastly, but certainly not least, a total of six interns will be joining us this winter at our headquarters in Montana, as part of our year-round National Internship Program. Interns play a crucial role within our organization, with responsibilities including fielding calls on the Voter’s Research Hotline (1-888-VOTESMART), maintaining our six categories of data on candidates and officials, and conducting initial research on candidates’ issue positions, for use inside the interactive tool VoteEasy.

If you, or some one you know would be interested in interning or volunteering with us in Montana please visit our website for more information, or call us toll-free at 1-888-VOTESMART.


The Long Road to the White House
The presidential primary season is upon us and as you've witnessed the candidates' contention, mudslinging, and politicking travel across the country, you may be wondering to yourself, “how many times are we suppose to vote for the president anyways?” Allow us to explain...

To start, the overall goal of primary elections is so states may individually choose their delegates for the national party convention. The selection of delegates differs by state in accordance with the given party’s established by-laws, but the two methods are generally between a caucus or a primary.

Early races such as the Iowa Caucus, and primaries in New Hampshire, South Carolina, Florida, and Nevada all typically serve as initial indicators of which candidate will win their party’s nomination and which ones will drop out early from lack of support (aka Michelle Bachmann, Herman Cain, and Rick Perry).

A caucus, apart from being one of the most fun words in the English language, is simply a meeting of supporters or members of a political party. Caucuses are private events run by the political parties themselves and are the older, more traditional events in the presidential nomination process. States that hold caucuses include Iowa and Nevada, among others.

Unlike a caucus, which is run by the individual parties, a primary is carried out by state and local governments. States that hold primaries include New Hampshire, New York, Montana, and the majority of other states. Similar to the national presidential election (with its electoral college), this primary election process allow voters to participate indirectly in selecting their political representatives.

During the primary process, voters select delegates who will be the ones actually responsible for choosing their party’s candidate for president. Through the series of caucuses and primaries that are generally held by states from January to June of an election year, all of the delegates for the parties’ national conventions are settled upon. When these delegates all meet at their respective party’s national convention to officially choose their presidential nominee, a simple majority of delegate support for a candidate is needed to win that party’s nomination.

We hope this information offers a basic outline of how the national primary election process is carried out. For specific questions regarding all 2012 presidential candidates, you know you can turn to votesmart.org or speak with one of our researchers by calling us toll-free, 1-888-VOTESMART. 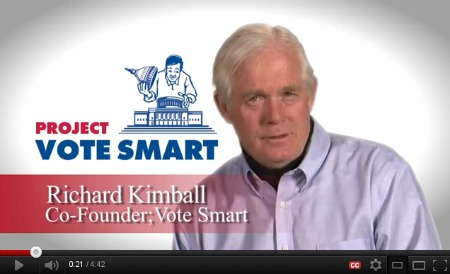 A Video Message From Richard Kimball, President
It's time for every thinking American to saddle up and fight for that most precious component in our struggle to self govern, our right to know. Please watch and share this video with all of those you know who would be interested in helping us change our country’s future if they only knew what is being built here at Vote Smart.

Project Vote Smart has been made possible by over 100,000 liberal and conservative fellow citizens. No funds are accepted from lobbyists, corporations, unions or others that support or oppose candidates. As a volunteer-based organization, Vote Smart will survive on individual small contributions or not at all. Learn more on how you can become a Vote Smart Member.