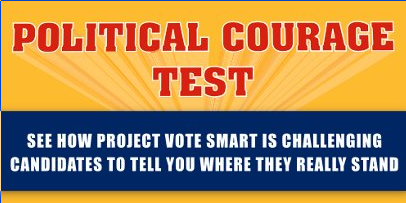 It's baseball season in America, a time when we can set aside our partisan ideology and cultural differences and just agree to hate each other for living in different cities. For Smart Voters, however, this month is also the start of another much-celebrated pastime: the Political Courage Test (PCT).

Each election year, the PCT examines one key aspect of political candidates' public integrity: their willingness to tell voters how they may handle important issues on the voter's behalf.

It is essentially a one questions Test, asking are you willing to tell citizens where you stand on the issues you will most likely face if elected. If the candidates say yes, we ask them to prove it by answering a series of questions covering issue areas including Afghanistan, guns, the budget, same-sex marriage, immigration, and more.

We know 2012 candidates will be inundated with surveys and questionnaires from organizations all over the country, however, the PCT is the only Test of it's kind; meticulously objective, neutral, and most importantly, the Test represents the Peoples' interest in transparent, honest campaigning. But don't take our word for it, just read what other news organizations are saying about our work:


“Project Vote Smart is trying to make sure that candidates running for office aren't able to dodge the important questions this election season." - Dallas Morning News

“These are not biased or leading questions. They are simply attempting to get candidates on the record on issues they might face if elected." - Springfield News-Leader

“It shouldn't take courage for a politician to complete a survey regarding positions on the issues. Yet seemingly it does. We hope candidates...will make the principled decision to respond to Project Vote Smart..." - South Bend Tribune


Did you know? For those congressional candidates unwilling to provide voters with their answers to even the most basic issue-related questions, our researchers are now closely examining their public record in order to infer their answers on a total of 13 major issue areas. This research along with the candidates' direct answers will be used inside our award-winning, interactive tool VoteEasy, allowing voters to find their best match within their candidate pool.

So root, root, root for the home team, and chow down on some cracker jacks, but remember to contact your congressman and tell them to submit the PCT. As a voter, you deserve the facts before you go the ballot box this post-season.

GA votes to pass a bill that establishes accountability standards for schools.

ID votes to pass a bill that prohibits texting while driving.

MI votes to pass a bill that amends the requirements for wearing helmets while operating or riding a motorcycle.

WI governor signs a bill that amends guidelines for the instruction of human growth and development in schools.

KY senate votes to pass a bill limiting amount of over-the-counter cough and allergy medication that may be purchased.

1. The vote should be helpful in portraying how a member stands on a particular issue
2. The vote should be clear for any person to understand
3. The vote has received media attention
4. The vote was passed or defeated by a very close margin
5. Occasionally, if a specific bill is consistently inquired about on the Voter's Research Hotline, the vote will be added.

We've also recently started summarizing states' general sessions with "legislative wrap-ups".  So stay tuned to read what your legislative body has been up to.  Read wrap-ups from Utah and Wyoming now.

We have had three new staff members join our team this year, and we asked them what brought them here to Montana...

“I applied to work at Project Vote Smart because it allows me to not only participate in the political process, but also educate others on candidates and the important issues of the day. Furthermore, I am in a unique situation of performing a job that I love in a field that I am passionate about.”
- Rebekah Prince (Quality Control Administrator)

“I was drawn to PVS because of a disillusionment in our political process. Since I was young I have always been interested in politics, but recently had just about given up on following it. Then I found PVS, and saw a way that I could positively contribute to the political discussion. I was also drawn to PVS because of the location. It's about as good as it gets if you want to camp, bike, fish, etc.”
- Patrick Waller (Political Courage Test Associate)

“I have always had a great deal of interest in the political process and non-profit work.  Getting the chance to combine those and participate in making the information and research we gather more widely available, while also doing it in a ranch setting in rural Montana, isn't something that I could have passed up.”
- Hannah Stewart (Communications Coordinator)